S.D. Locke's 001 Proposal- "When Day Breaks"
Article: (http://www.scp-wiki.net/shaggydredlocks-proposal)
In this article, the sun itself has undergone some terrifying anomaly where any life that comes into contact with its rays mutate into horrible gelatinous creatures. These creatures can merge to form stronger versions of themselves. Some of them will try to maintain the shape they had in life, with mixed success. Almost the entirety of humanity is extinct, and only a skeleton crew from the foundation and a few other survivors exist in this nightmarish apocalypse.

For those out of the loop, the SCP wiki doesn't have a set 001, like it does with every other SCP number. Instead, users can submit their "001 Proposals", and it is up to the reader to decide which 001 Proposal is "canon" in their own interpretation of the Foundation's universe.

This is a very bleak scenario, but a short campaign or one-shot with this as the main premise could be extremely interesting. Especially if the characters are part of a group that is trying to leave the plane (or planet, in a sci-fi game) to start over anew, in a world where the sun isn't actively trying to kill them. The entire campaign would include leaving only in the safety of darkness, and some weapons would be discarded for their uselessness against these entities.

SCP - 096 "The Shy Guy"
Article: (http://www.scp-wiki.net/scp-096)
Fairly standard creepypasta monster, 096 is a long lanky humanoid that will hunt someone who sees its face to the ends of the earth before killing them. During this time, 096 shrieks uncontrollably as it chases the target.

Optional Alternative Rule:
In the SCP article, 096 will chase its victims constantly, inevitably, and will eventually strike, killing them practically instantly. For some games, this will work just fine- particularly meat-grinder games, or an SCP themed Paranoia/ Call of Cthulhu game. For others however, this might be a bit of a buzzkill, to have their character doomed as soon as they pass a perception check. Below are some possible "escape methods" I propose for a character who's seen 096s face, but isn't ready to die yet:

SCP - 914 "The Clockworks"
Article: (http://www.scp-wiki.net/scp-914)
Extended 914 Testing log: (http://www.scp-wiki.net/experiment-log-914)
This SCP is a huge device made from countless gears, belts, springs and pulleys that has an input and an output chamber, and five knobs. When an item is put into 914 and one of the knobs pressed, the item will be changed by 914.

While anything 914 outputs will be related to what was put in in some way, shape or form, it isn't always very obvious and GMs should interpret things however they want. It's theorised in the extended testing log that 914 is semi-sapient and is inconsistent in what it gives on purpose, but it generally seems to follow these rules for each of the buttons:

Making this work in the game:
914 is a very powerful SCP, and in the Containment Breach video game it is invaluable in helping you survive. There are a few things that a GM should consider before letting players run everything they own through this object on Very Fine and creating a million Vorpal Swords:

Posted by Gabriel Hole-Jones at 12:11 No comments:

The Tarrasque is a staple D&D monster. It's D&D fantasy Godzilla, that can withstand horrendous punishment and keep regenerating. It's a common choice of monster for an epic-level D&D campaign. It has also been the subject of that Clay Golem meme, when it was found that the 5e Tarrasque's attacks aren't magical, and therefore it can't harm creatures only hit by magical weapons- as Clay Golems are immune to non-magical attacks. Most GMs for 5e alter the Tarrasque to give it justice for its legendary reputation, as the 5e version lacks any kind of regeneration, ranged attack or attacks that can hurt a Clay Golem.

It makes sense then, that the dominant race at the time would use the best weapons they could find to take the thing down, and some settings go above and beyond just swinging swords and firing 90kg weights at it when it's 300 meters away.

In AD&D, the Tarrasque regenerates 1hp a round, but depending on your game, that might not be enough. In 5e, several other monsters can regenerate as many as 10hp a round, which works much better if you're playing a system that deals more damage.

Now in GURPS Black Ops, there are stats for nuclear weapons. I'm not really sure why you would need to give damage to something as powerful as a nuclear weapon, but it did give me an idea.

Tarrasques regenerate as long as they live in most editions, and most of the time only a Wish spell can keep it dead. This means that even though a 1 Megaton nuclear bomb does 12d6 x 2,000,000,000 (for a minimum of 24 billion damage), a Tarrasque would survive unless it was wished dead, regenerating 10 lost hit points every six seconds, or 100 hit points every minute.

Assuming a 3.5 average damage total per die on the bomb, it inflicts 84,000,000,000 damage, or 84 billion points of atomic damage provided the Tarrasque was in the 9-mile blast radius. This would easily reduce it to a very low negative HP number, and knock it unconscious. 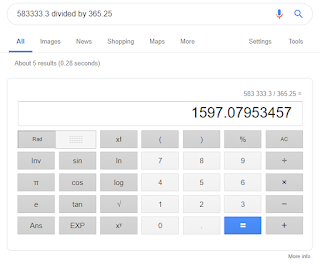 All in all, a 1 Megaton nuclear bomb knocks a Tarrasque that regenerates 10hp/round for almost 1,600 years. 16,000 if the Tarrasque only regains one hit point a round.

So, my proposed campaign setting for a super-heroic fantasy game: a fantasy post-apocalypse where every 16,000 years, the Tarrasque finally arises from its slumber. Every time, nuclear weapons and/or other extremely destructive weapons are employed against the monster, causing an apocalypse and having everything be destroyed. The Tarrasque then slumbers for another 16,000+ years. For your campaign's endgame, the PCs have to do their best to break the cycle, and save the world.

It's like the Reapers from Mass Effect + Godzilla, actually.

Posted by Gabriel Hole-Jones at 11:57 No comments: